From Audible reviews (excerpts), listeners had this to say about Thomas Machin… 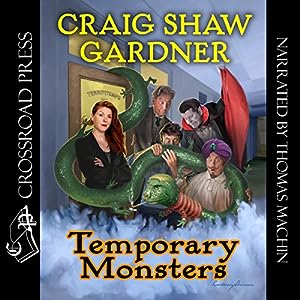 Hotel Transylvania as a spy agency

This is a fun story that doesn’t try to take itself too seriously and I enjoyed listening to it from beginning to end. I purchased the physical copy of the book as well as the audiobook but if I had to recommend one or the other, I definitely recommend picking up the audiobook version. Thomas Machin does an incredible job of giving all of the characters goofy exaggerated voices that puts you in the weird off-beat universe. He basically works as a one man cartoon show and that’s impressive. Lenny sounds like a pleasant easy-going geek, the Baron like Count Chocula, Karnowsky like Karloff, and Bob the Pooka like a goofy Mister Ed.
9/10

The narrator made the story really funny.

Still funny after all these years.

This is the first book I’ve heard by Thomas Machin…and doing a search here on audible I am shocked to see it’s his only one!! How is that possible? Is this seriously the first book he has done? If so…WOW. The guy is fantastic. Some narrators can do ‘voices’ and some can’t. (Of course there are some who think they can when they can’t and no one has been nice enough to tell them that they can’t, but let’s not talk about those. Thomas Machin CAN do voice. He totally brings every single character to life. I’m honestly not sure who I liked best…no, that’s not true. The Barron (aka the group’s vampire) is great as is Karnowski (the groups ghost finder), but hands down my favorite had to be Bob the blue pooka! Not only were his parts funny has heck, the voice Machin uses for him was a riot. I seriously hope to see more from Machin in the future.

What a fun story this was to listen to. I am sure I would have enjoyed reading it but I think that Thomas Machin’s narration was spot on and truly brought these crazy characters to life better than my imagination could. The off the wall humor in this book had me LOL’ing quite often. The singing Buffalo and Bob are my absolute faves. I hope that the rest of the series will be made into Audiobooks. I will be looking for more from this Author as well as from the narrator.

One of the things I really liked about the narrator was that the voices were very distinct and you knew who was speaking just based on the voice used. Truly sounded like 20 different and unique people reading a radio play. Kudos on that! Would definitely listen to other audiobooks he narrates!

This book is very entertaining and full of fun scenes and Thomas Machin brings the characters to life. All the characters are voiced well. Please bring more Craig Shaw Gardner to audio!

I am not used to hearing a narrated audio book (I usually would listen to fully dramatized books) but was pleased with the ever-twisting storyline with familiar and not so familiar characters. Temporary Monsters has been a fun read/listen. Kinda reminds me of Monty Python toned down a bit. It’s hard to believe that it’s only 1 person doing all those voices. Amazing!

We also offer Script or Manuscript editing as well for reasonable prices.  We can include a discounted price if WE produce the audio for your project.